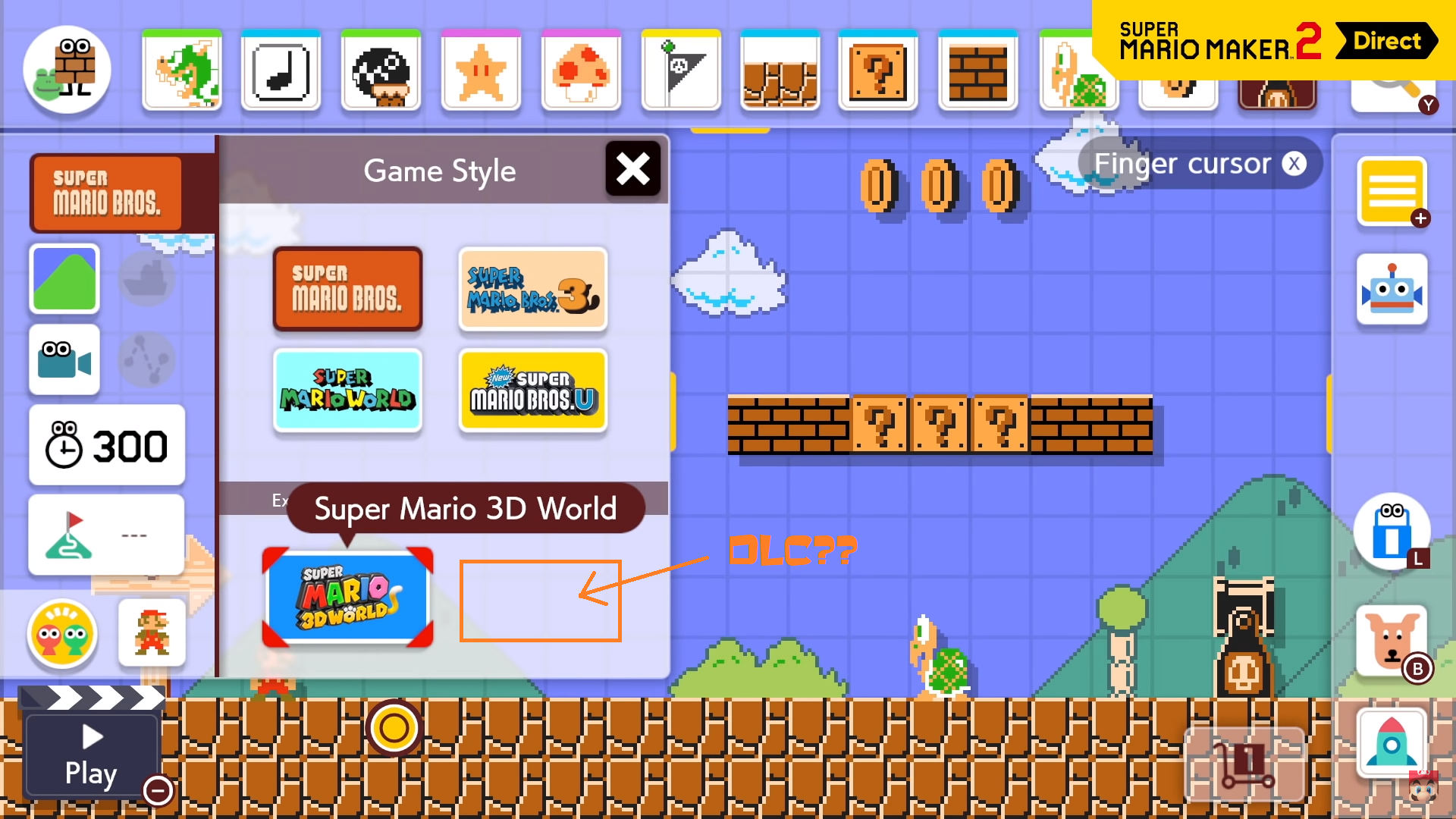 GameThink: What the Super Mario Maker 2 direct means for E3 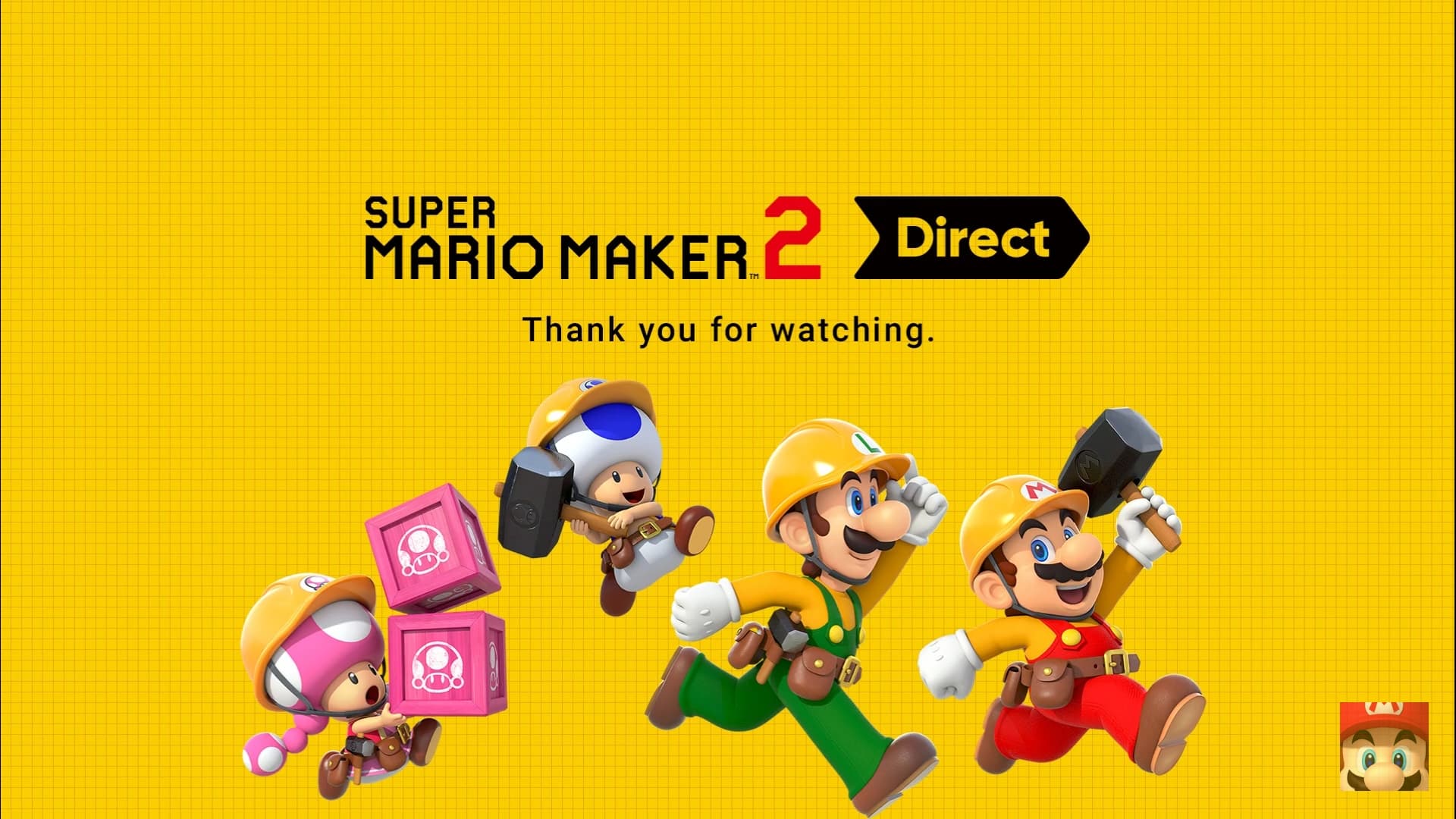 We’ve just had a short but cram packed direct all about Super Mario Maker 2. Many many new things were announced in the presentation, let’s discuss what was unveiled, and what we think it means for E3 this year.

In addition to the themes, if you use the Moon object (also new) you turn the theme into night mode which will change the way each of the themes behaves.

This means there is a crazy amount of customisation, just in the way the game looks. That’s before we even get to the numerous new objects and enemies.

So much new stuff!

Speaking of which, one of our favourite mechanics from Super Mario World makes (pun pun) a return. The snake block. We can see this being utilised heavily to create some challenging courses. The swinging claw also looks fun. It initially looks like it should be more at home in a Donkey Kong Country game, but nonetheless, we’re looking forward to using it.

If you’ve got a couch friend then co-op maker sounds like it could be something nice to play together. Arguing about the creative direction is half the fun right?

Super Mario Maker 2, also offers lots of new ‘clear conditions’ for the course. No longer is the only objective either defeat the boss or reach the end of the level. There are plenty of new ways to beat the level, to test out.

About halfway through the presentation, we were treated to a red Yoshi. We here at Front Page Gaming, hope that all of its sibling colours are included, just like the original Super Mario World.

One thing to note about the direct is a clue to potential DLC. When the Super Mario 3D world game style was discussed, the image shows a very clear empty space next to the icon for the style. We predict this will be filled in a later content update, free or otherwise. A Mario Odyssey style perhaps?

Course World returns, this is where you can share your own and play other people’s handmade courses. In addition to this, two new modes are coming in Super Mario Maker 2 online. These are Endless Challenge & Network Play. In Endless Challenge, you play an (as the title would suggest) endless stream of course of a chosen difficulty, until you run out of lives. Depending on how well you do, will determine your world ranking.

In Network Play you can either play competitively or cooperatively as a group of four. In Versus Mode, you race against each other to reach the end of the level in a randomly selected course. It is in our opinion, that this is where the longevity will be in the game. With the massive variety in the created courses, this mode will take a long time to get old.

We are more excited for E3 because it should be a far more varied affair than the show last year, which was almost entirely dominated by Super Smash Brothers. Let’s not forget that we’ve still heard little about several big first-party titles coming to Nintendo Switch this year. These include Luigi’s Mansion 3, the new Animal Crossing, Town (from the makers of Pokemon), Bayonetta 3, and Pokemon Sword & Shield.

With the surprise announcement of this direct and the previous direct for Fire Emblem 3 houses, it gives us great hope that with these taken out of the picture it should provide more time to cover a wide range of killer first party games at this year’s E3.

Taking Smash out of the picture, last year’s E3 a little lacking. After the triumph that was the Switch’s first outing at E3 in 2017, it could be argued that Nintendo rested on their laurels a bit last year. We’re hoping that this year sees a return to form, particularly regarding the first party titles.

What did you enjoy most about the Super Mario Maker 2 direct? What are you most looking forward to about E3? Let us know in the comments down below.