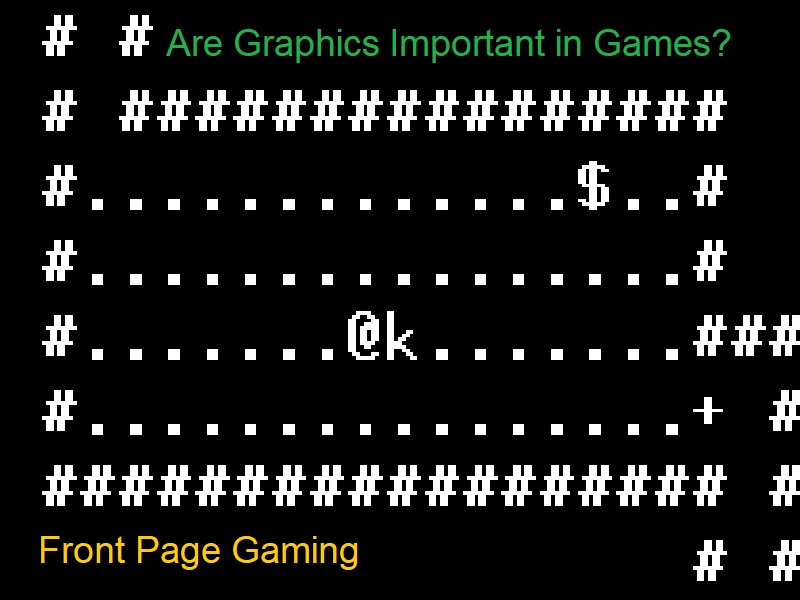 GameThink: Graphics in games – Do they really matter?

My thoughts on the age old debate

What’s the most important thing in a game? Some will say story, some will say game play, and some people will say the graphics. These are my thoughts as to why graphics in games aren’t all that important.

Let me take you back to a young me, a very young me to one of my first gaming experiences. That experience was playing a game called “The Dungeons of Moria”. This is a game as you may be able to tell based on the name is inspired by the Lord of the Rings books.

Moria is a very basic looking game which uses an ‘@’ symbol to represent your character and other letters and symbols for the other characters and enemies in the game. The “world” you play in is a series of boxes defined by ‘#’ symbols. Comparing this to a modern game, graphically it falls far behind. Does that make it a bad game?

Moria is to this day one of my favourite games. Released in 1988 for me it has stood the test of time despite being 30 years old. The adventure the game takes you on captures your imagination as you travel around the black and white world.

What is important in a game?

In my opinion graphics are not the most important aspect of a game. You have to ask yourself the question, not “What does the game look like?” but “Will I have fun?”, “Will I get lost in the adventure of playing it?”. When you play a game you want to be transported to another world, you want it to set your imagination going, thinking about what it would be like to live in that game’s world.

Graphics can of course help towards that goal, but they are not vital. In the example above, I can still imagine what the world would be like, without the visual aid. To use an example from the film world, Schindler’s List is no less of a film than Avatar simply because it is in black and white. A novel is no less engaging simply because there are no pictures.

Some problems with graphically intense games

Unfortunately for some people, very graphically intense games can be a problem. This issue is that people can experience motion sickness dubbed “simulation sickness“. It is thought that because some games are so hyper realistic that they provide the illusion of motion despite not actually moving from your chair.

Whilst I don’t suffer from this myself, I do know some people who are badly affected by this. As a result they cannot experience some of the more modern, 3D, free camera games.

Games like: No Man’s Sky, Sim City (2013) & Watch Dogs were all games which looked beautiful. Unfortunately however were less than stunning when it came to game play. It could be argued that there were some bigger reasons why these games at least initially weren’t as successful as they should have been.

Whilst when a game is made it is important that it looks pleasant to the eye. It is the opinion of this writer that spending resource graphical prowess shouldn’t take the place of game play. I think as this society evolves we are becoming more and more obsessed with the visuals of things as opposed to the substance.

Our first priority as gamers and people in the gaming industry when looking at a game, should be “Is this game fun to play?” rather than “Are the graphics any good?” Let’s move on from this thinking and enjoy a new gaming utopia.