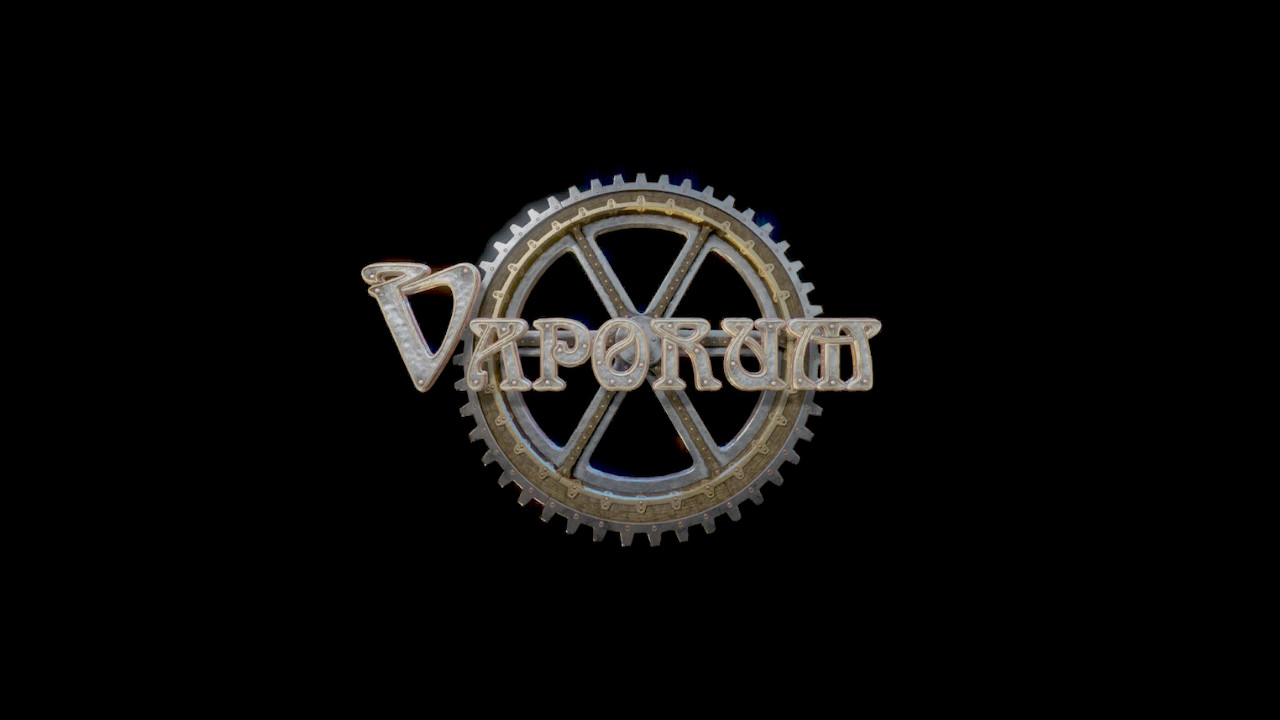 Another brilliant RPG for Nintendo Switch

Remember those old fashioned grid based Windows screensavers from Windows 98? Ever wished that you could play it as a game? Wish no more! Welcome to Vaporum for Nintendo Switch.

Vaporum, as you may have guessed, is a grid-based RPG dungeon explorer set in the Steampunk genre. It is of course far more in-depth than those old screensavers, don’t worry about that. The game starts as a cutscene where you are being drawn to a ‘monumental column’ on an island. It is inside of this column that the entire game takes place.

The atmosphere created in Vaporum is dark and mysterious. You will find yourself creeping around each corner in trepidation about what’s to come. Graphically there are no issues, the monsters are well detailed and the environment is crisp. You will have lots of fun, simply exploring the levels, taking in the gloomy setting.

One of the first things you will do in the game is to decide which ‘Rig’ you want to use. These serve as your main armour, and you can customize them further by finding weapons and armour pieces as you would in other dungeon crawlers. There are four ‘Rigs’ in total, each of them provides a bonus to a different stat. The four options give bonuses to Toughness, Combat, Resistances & Tech. 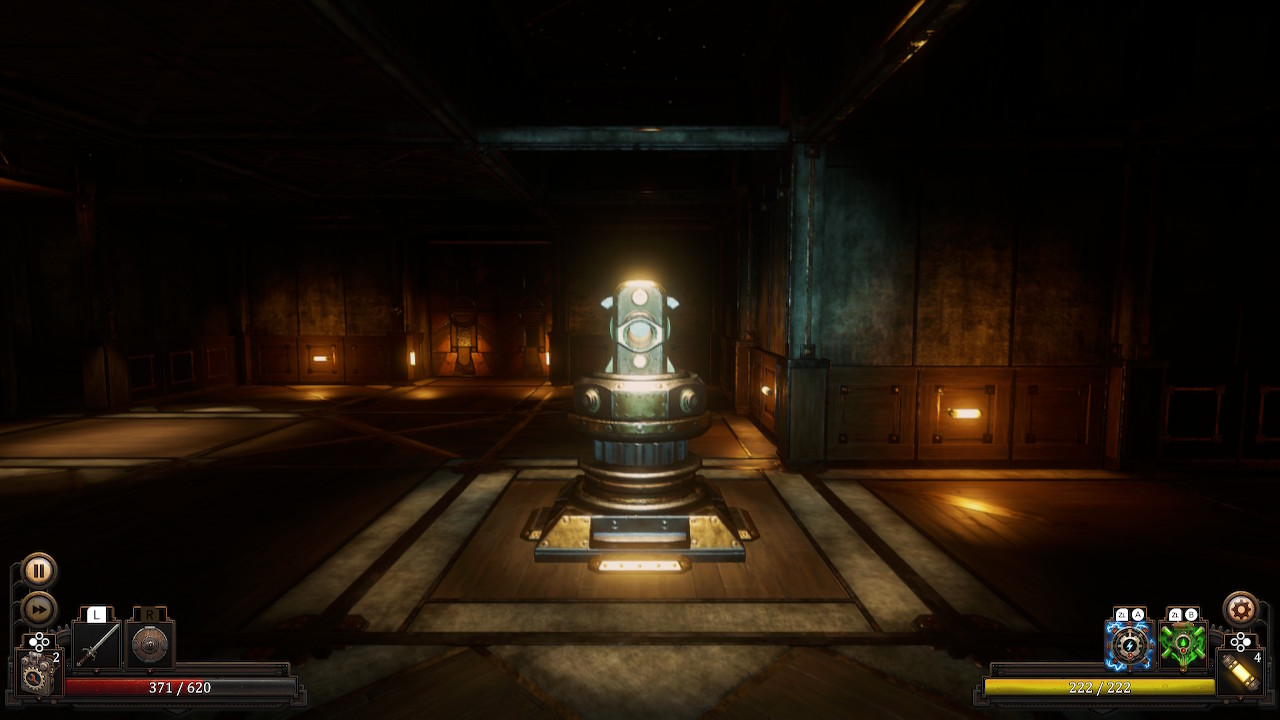 Whilst three of those bonuses may be self-explanatory, Tech increases your energy reserves (mana) and the damage output of your gadgets (spells).

The entire game is played from the first person perspective on a tile-based system, such that the enemies will appear directly in front of your character. Be prepared for some minor scares as you turn around a corner and run into something. You start the game at the bottom of the mysterious tower and slowly work your way up.

The tower is split into several levels, each given a mysterious name. Along each level, you will find both written and audio lore. These give the game a real mysterious atmosphere and leave you wondering what happened between the two characters in the stories. The audio files, in particular, are a pleasant addition to the game. These are how the story is delivered to you, the unravelling mystery is brilliantly captivating. 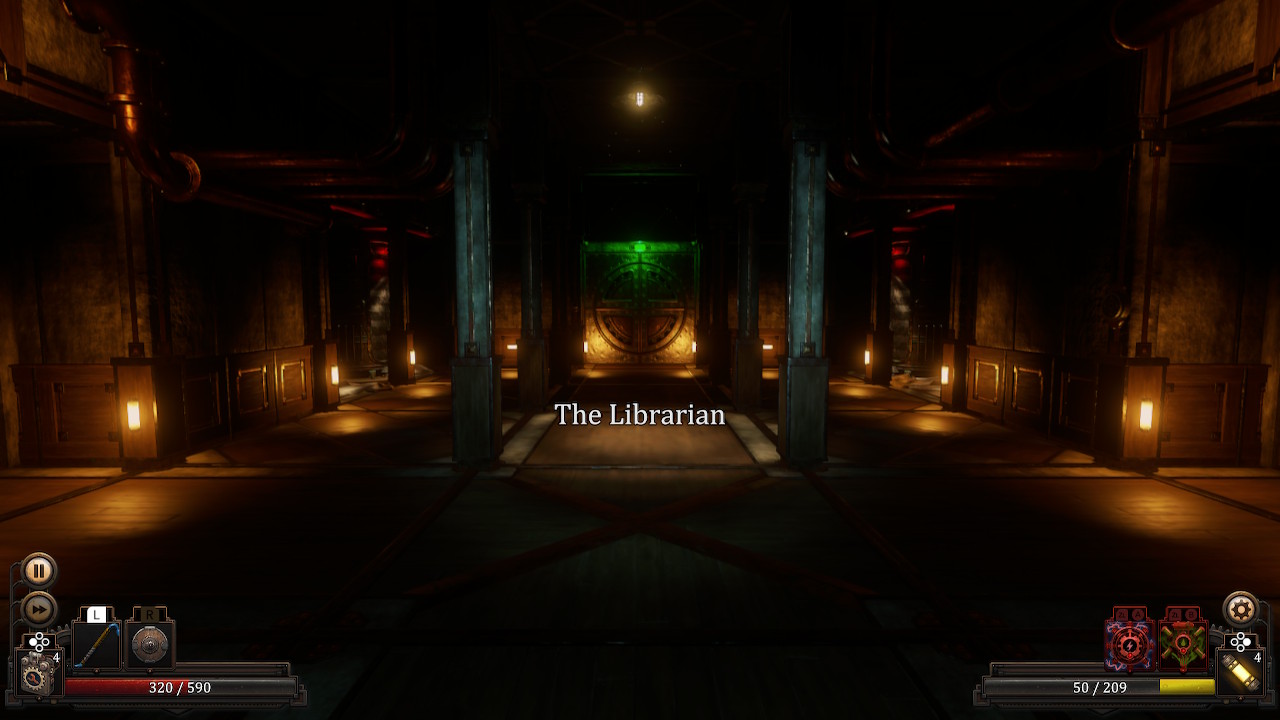 The music in Vaporum, also adds to the mysterious mood.

Unfortunately, the level system contains one of the games minor shortcomings. The monsters in these games are not randomly placed. If you do the same level twice, if you restart for example you will always come across the same monsters in the same places. This isn’t a massive problem, however, you would expect there to be some aspect of randomosity in a game which describes itself as a dungeon crawler. 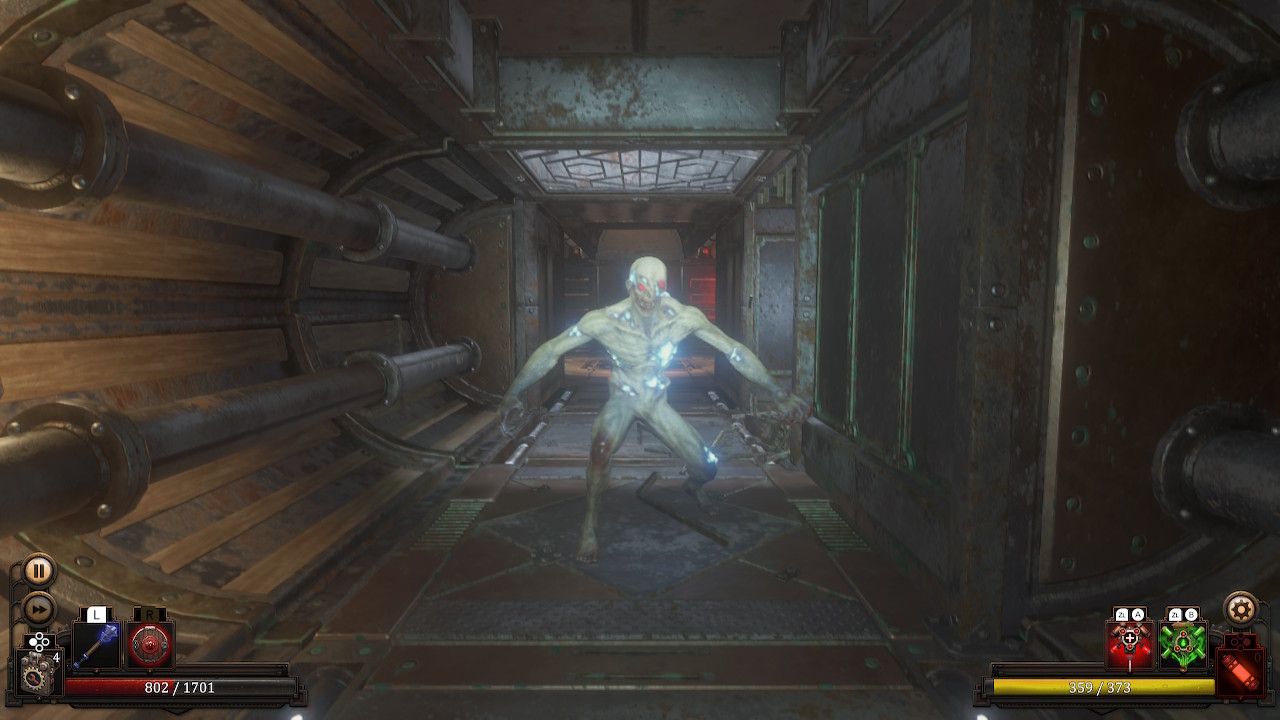 There is quite a wide variety of unique monsters, some of which are quite challenging. If you are not careful, each of these has the power to kill you. A good strategy is to make use of the grid-based system and keep moving whilst attacking. The enemies are mainly split into mechanical and organic varieties and different weapons will be more effective depending on the type.

Look after your health bar, as mentioned above the items in the game are limited, including those that regenerate health.

Multitude of Weapons and Armour

Regardless of what your favourite type of weapon is for a dungeon crawler, you will be well catered for in Vaporum. There are some really exciting weapons available in this game. On occasion, when you find a unique item, your character will spout a piece of dialogue in memory regarding the item.

Weapons are not your only offensive capability, however. Whilst going along your journey, you will find several gadgets. These serve as the spells in the game and cover a wide variety of abilities. Some of these are taken directly from the enemies, so you can give them a taste of their own medicine. There are also several gadgets which are defensively minded. 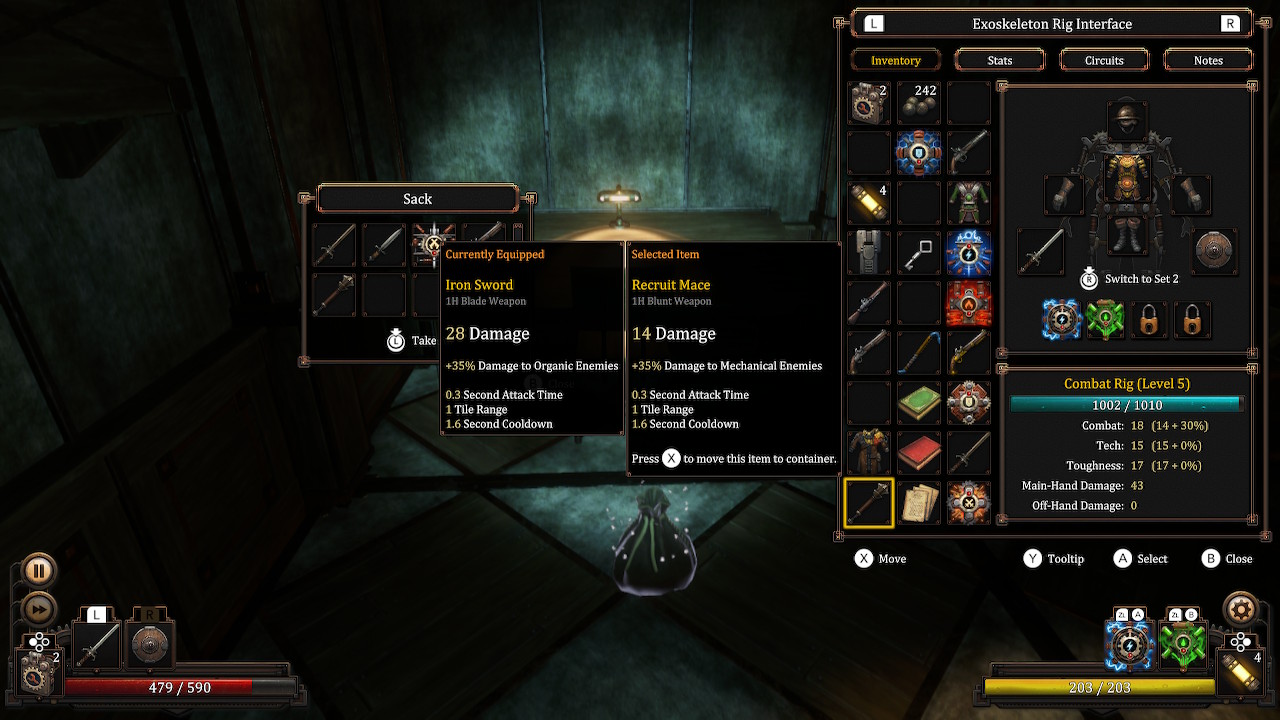 To use gadgets you will need energy, this is the yellow bar in the corner of your screen. It regenerates relatively slowly so use gadgets sparingly.

Performance wise the game runs smoothly and without any glitches, apart from a few minor stumbles during the final boss battle as the boss changes phases.

Vaporum is full of puzzles

On each level, you will find several puzzles which you need to solve to progress to the next area. Some of these are really quite clever and well thought-out. Others, unfortunately, we only passed through sheer luck and couldn’t find any reason as to why that was the solution. 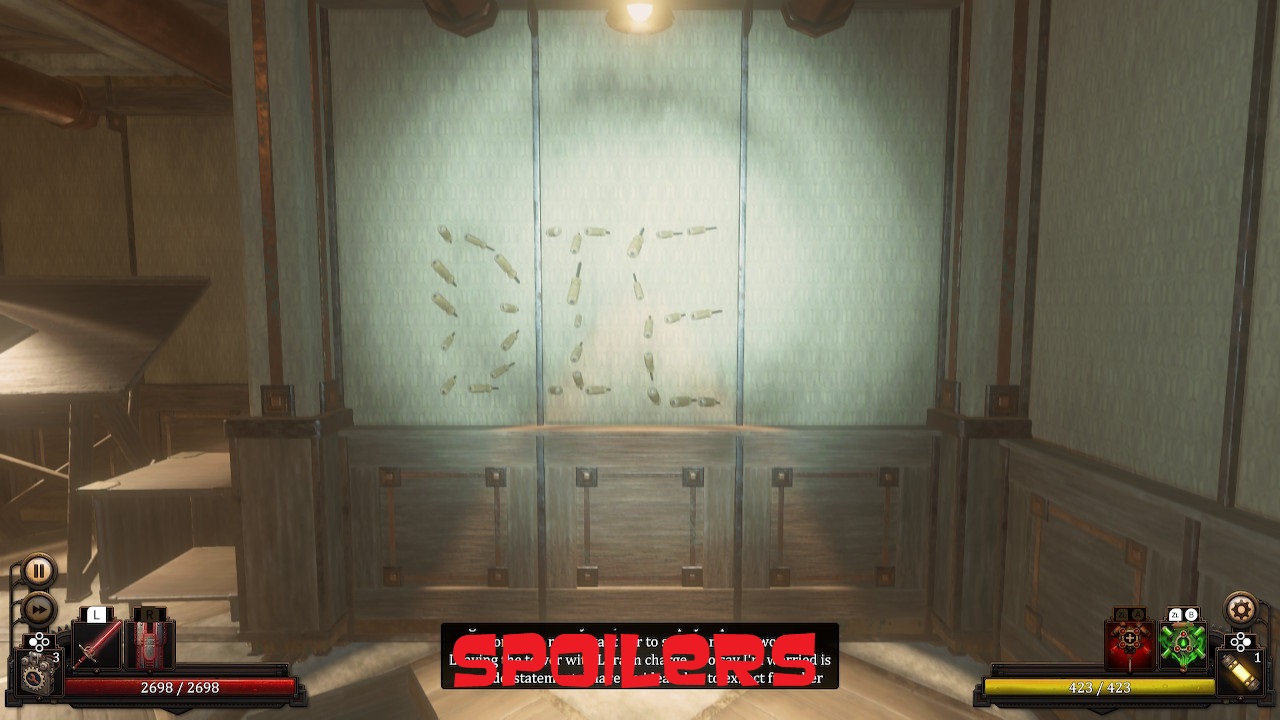 One other minor shortcoming in Vaporum is the lack of a system for dealing with unwanted gear. Understandably a pretty little shop would look a little out of place in such a dark game. We do wish however that there was some way of gaining something from used gear. As your inventory space is limited we found ourselves simply throwing old stuff onto the floor, which seems a bit of a shame. 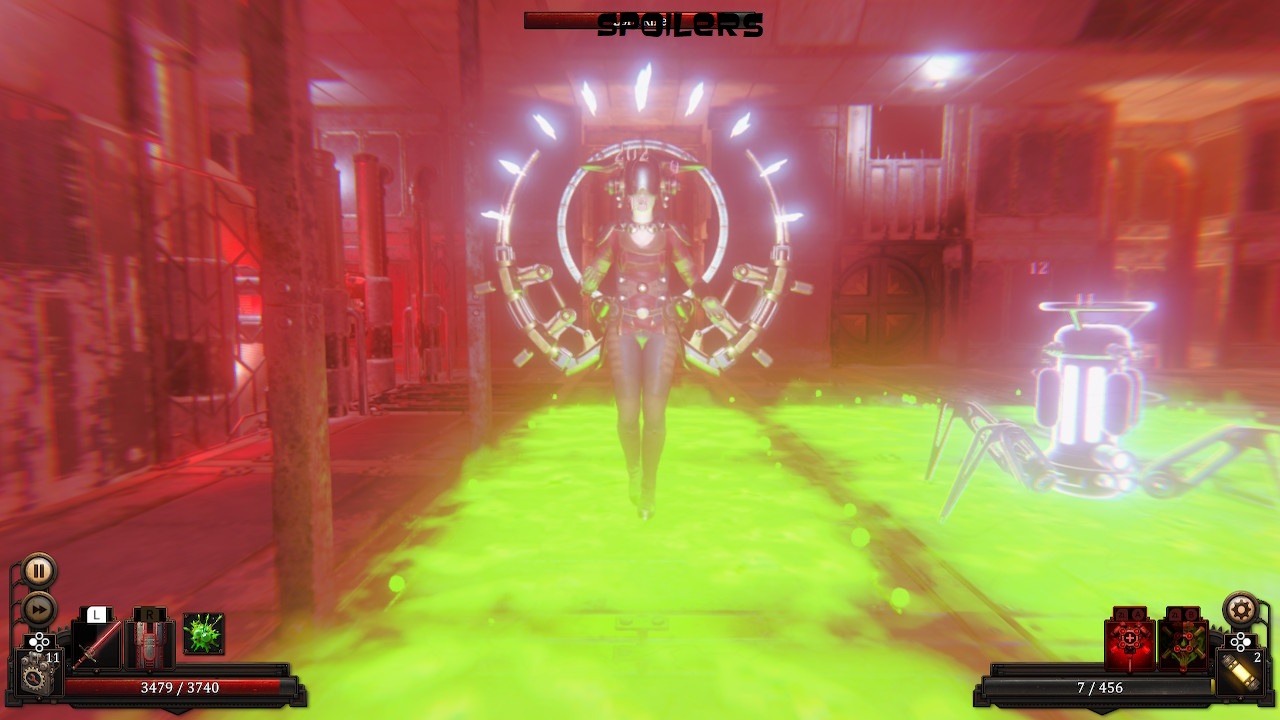 In conclusion, Vaporum is a great game. The mood is mysterious, the lore is nerve-racking and compelling and the puzzles engaging. The levelling and upgrade system is also quite fun. Lovers of exciting unique weapons in RPGs will find space for this one on their shelves. It does have some minor shortcomings but these could be changed/corrected in a sequel (We’d love a second adventure). Turn the gamma right down, be brave and explore Vaporum on Nintendo Switch. 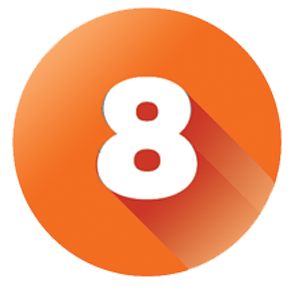 With thanks to Switch Island for providing the review code